Tony, "I'm a 60-year-old widower, my wife died in early 2013. We were married for 30-plus years, our marriage was incredibly blessed.  I'm a better person due to my late wife.

"We raised her two sons from a prior marriage. My step sons are now in their 40's. We did not have additional children from our marriage. We (I) have three grandchildren, 10-12-14. All are healthy and normal for their age. A grand child is named after me.

"I'm now dating. I'm planning to ask my step sons if I can bring a companion to family holiday functions. I'm not asking for an immediate response from them, knowing they need time to consider.


"I'll honor their response, I won't make threats if they deny my request. I don't want to give control of my remaining life to my step sons, however I realize the complex task the parents have to discuss the subject with the grand children.

"How should I handle the sensitive issue?"


Tom's response to Tony: "You are right, this is a sensitive issue. Kudos to you for being considerate of your stepsons and step grandchildren.


"I am not a widower so by no means am I an expert on this topic. But in 18 years of writing about dating later in life, I've heard enough stories from new widowers and the women who have dated them to gain some knowledge on the issue.


"You've got some time before the holidays. Why not hold off just a little while before asking them? Yes, you want to be in control of your decisions, but, on the other hand, you certainly don't want to alienate the family you have loved and raised for more than 30 years. Over the holidays, especially this first holiday season, being with them will be essential for you.


"Have you met someone already that you have in mind? Is she putting pressure on you to include her in this year's family holiday functions?


"What I'm about to say may not apply to you, but it often applies to new widowers. Also, many new widowers can be very, very stubborn. They won't listen to the advice of friends and family.


"Many jump back into dating before they've properly healed. They miss their spouses so much it's almost unbearable.  Some are so darned lonely that they feel dating and having a new mate will cure their loneliness.


"But, what often happens is, they wake up one morning and realize that they can't go on with the new relationship, that they've been kidding themselves and still love their deceased wife. They end the relationship, and in doing so, break some woman's heart.


"Without knowing more, I can't be sure of what your situation is. Perhaps you wife was ill for a long time and your grieving period started long before she passed, which might make you more ready to have a new relationship. More details from you would help.


"I send out an email newsletter each Friday titled "On Life and Love After 50." More than 1,000 people read it each week and send in their comments. Many are widowed people who have experienced the loss of a spouse. Sharing your story with them would bring lots of objective comments.


"I have written an eBook titled, "Widower Dating. Gold mine or mine field?". You can download it immediately to your computer for less than five bucks to gain some insight of what others have gone through. Here is the link to that book: 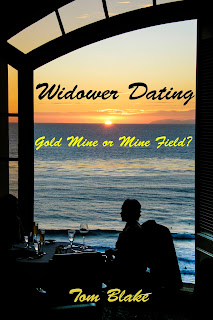 "A major issue in senior dating, particularly for widowed people, is the involvement of children and children's acceptance of a new person in that widowed person's life. However, your question, in my opinion, is more than just about gaining acceptance from your stepsons and grand stepsons.

"Again, more information would be helpful. Thanks for having the courage to write."
Posted by Tom at 10:18 AM