Thirty-eight years ago, I attended a TV show taping at the NBC Studios in Burbank, California. I was there as a guest of singer Johnny Cash, who was a spokesperson for Victoria Station, the restaurant chain for whom I was the marketing director.

At that taping, I was seated in the front row with Rosanne Cash, Johnny’s daughter, who was 22 at the time. John Denver was the master of ceremonies and singers Roger Miller and Glen Campbell were also on the set.

I remember that day quite vividly because Johnny left the stage unexpectedly and Rosanne was concerned because at the time, Johnny's wife June Carter was having some tests done at the Mayo Clinic. However, everything turned out to be OK with June that day.

The reason Johnny left the stage was a prisoner at the Utah State Prison, Gary Gilmore, wanted Johnny to sing him a song before he was executed. Johnny did over the phone and then returned to the stage to finish the taping.

A few months ago, I read that Rosanne was going to appear in concert at the Fred Kavli Theatre at the Thousand Oaks Performing Arts Center at 8 p.m., Friday, March 20. Rosanne is an accomplished musician herself, who won three Grammy awards this year for her album, “The River and the Thread.”

She is often classified as a country singer, but her music combines folk, pop, rock and blues as well.

My partner Greta and I decided to attend Rosanne’s concert and get a hotel room near there so we would not have to drive late at night.

I decided to make it a total Johnny Cash-related trip. Johnny’s manager, Lou Robin, who now handles Johnny’s estate, lives in Thousand Oaks. We’ve been friends for 39 years. Greta and I arranged to meet Lou and his wife Karen for breakfast on Saturday, at a place called Jerry's Famous Deli in nearby Woodland Hills.

Rosanne’s concert was outstanding. She performed several songs from her Grammy-winning album. At the start of each of those songs, she spent a few minutes narrating the history and background upon which the songs were based, which was a nice personal touch audiences don’t often receive from performers.

She ended the regular part of her concert with her number one single of years back, “Seven Year Ache.” In the encore, she sang the Bob Dylan song, “Girl from the North Country,” a song her dad and Dylan made popular as a duet in 1969. That song was featured in the movie, “The Bridges of Madison County.”

All members of Rosanne’s five-piece band, including her husband John Levanthal, were exceptional musicians. The concert alone made the long drive worthwhile.

After the show, Greta and I went backstage and had a few moments to spend with Rosanne. She and I had a couple of laughs together remembering the old days. 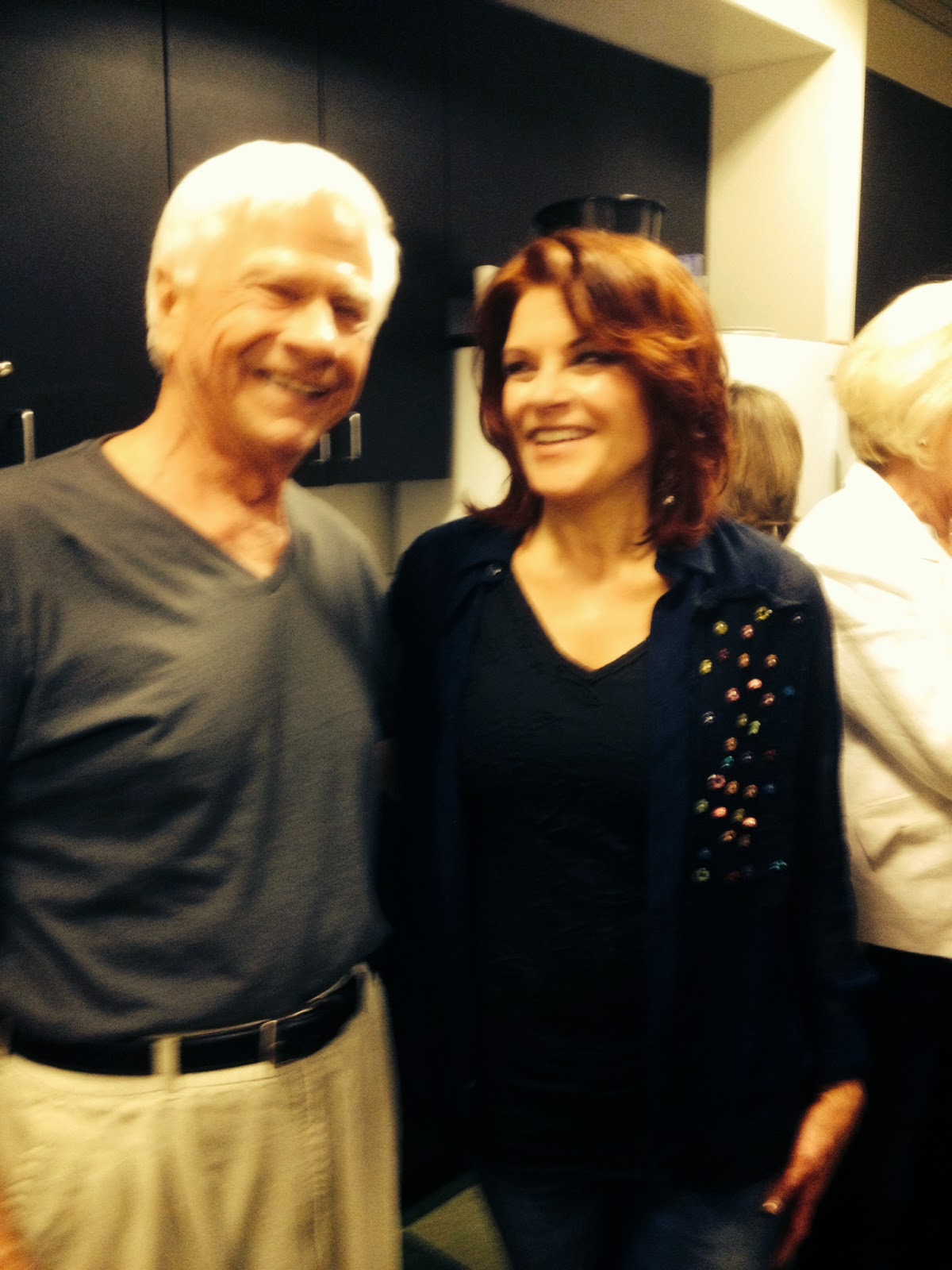 Breakfast the next morning at Jerry’s Famous Deli with Lou and Karen Robin, was equally rewarding. Two hours went by in a jiffy. To listen to stories from Johnny Cash’s manager of 40 years was fascinating for both Greta and me. I learned things about Johnny that I did not know although I traveled with him frequently in the two years we worked together.

Lou was also the manager of Don Ho for a while, after Johnny had passed away.

On the drive home Saturday afternoon, Greta commented on the similarities in mannerisms she noticed between Rosanne and her father Johnny. She added, “Johnny would have been proud of Rosanne’s professionalism.”

It was a special week-end for me; I was happy to be able to share it with Greta, and have her meet these people I have known for years who were so close to Johnny Cash.