The Johnny Cash I Knew. A Kind and Caring Man

The Johnny Cash I Knew. A Kind and Caring Man


Before I retired on January 30, retired people often told me: "You will wonder where the time goes and be busier than ever."


I suspected they were right. I had been building a bucket list over the years and it had several items on it. The top item: travel with my partner Greta as much as we can while our health permits. In April and May, we took a nice trip to Europe.


Other items: continue writing this column, and then there was preparation for the fantasy football season, which kicks off this week.


Why did that concern me? I knew Johnny Cash and worked with him for two years in the mid-1970s when I was the marketing director for the Victoria Station restaurant chain. I had hired Johnny to do our radio commercials and got to know him well. He was one of the nicest guys you'll ever meet.


That 10-year bucket list item: Write a book that would reveal the kind and caring side of Johnny Cash that I had witnessed first-hand. I simply wanted to set the record straight. Before retiring, I didn't have time to finish it.


Finally, 10 years later, over this summer, I wrote the book. Last week, I put the full-court press on finishing it. If you don't do it that way with a book, you'll never get it done. On Friday, I uploaded the finished book to one of the largest online Ebook bookstores in the world, Smashwords.com.

The title: "The Johnny Cash I Knew. A Kind and Caring Man." Most of the 17 pictures were taken 40 years ago with my old Kodak camera and there are many examples of Johnny's kindness in the book. 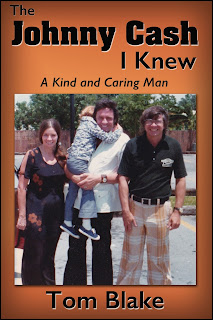 ﻿
﻿
To read more about this book, or to purchase it as an ebook on Smashwords.com, follow the link


The most unique experience with Johnny: Going into San Quentin Prison with him for a concert.


Many older people tell me they want to write a book, to leave a legacy for their families. Ebooks are a great way to accomplish that goal without much cost, and, after they are published, they can be updated and changed. I invite readers to contact me if they have questions about ebook publishing.


So, with the book published, it's time to turn to other bucket list items, but which ones? Therein lies the challenge of retirement: which activity to tackle next? Those retirees who said "You'll be busier than ever" were right.


Maybe I'll open a restaurant. Nope, already done that one for 26 years. It's probably time for another trip with Greta.

Email ThisBlogThis!Share to TwitterShare to FacebookShare to Pinterest
Labels: bucket list, Johnny Cash, On Life and Love After 50 newsletter, sup, The Johnny Cash I Knew. A Kind and Caring Man, Tom P. Blake