Rolling with the punches: Sunday July 19, 2015
On Life and Love After 50 Newsletter
My partner Greta and I had our first date on June 27, 1998. We met at my deli when she ordered a fresh carrot juice. A couple of weeks later, we attended the Orange County (California) fair. I remember vividly going to the fair that year because we saw Jose Feliciano perform.


That 1998 concert was a no-ticket-needed, no-reserve-seating, event and I was pleased that Greta insisted we get in line early enough to get a great seat. When the gates opened, she ran, and I mean ran, and grabbed two front-row seats. I said to myself, this is the type of woman I want in my life.
The annual fair has become a tradition for us. Each year since 1998, we've checked out who is performing in concert at the fairgrounds' Pacific Amphitheatre, choose an entertainer or group we like, and purchase the best tickets available as early as we can. A concert ticket gets you into the fair for free.


I'm a country music fan. Greta enjoys some country but isn't as avid as I am--for her no cowboy hat or boots, no Hank Williams Jr. t-shirt, just comfortable summer clothes for an outdoor concert under the stars.
We've seen Alan Jackson a couple of time's there. I call him "The Dude." Once we sat behind the mixing control booth and after the show, the producer gave us Alan's hand-written playlist, which I thought was a big deal.


This year, I ordered tickets for us to see Willie Nelson this past Sunday night at the fair. I've been a huge fan of Willie's, even before I got to work with Johnny Cash in 1977 and 1978. Johnny and Willie were buddies, but I never got to meet Willie. I said to Greta, "Chances are, this is the last time we will get to see Willie Nelson perform. He's 82."
Greta insisted I read Willie's new autobiography, "A Long Story," on her Kindle, on the flight home from Germany in June. It's a great book and it fired me up even more about seeing him in person--the guy is a classic.
I was excited because also Alison Krauss and her group, Union Station, were going to be the opening act. How often do you get to see a legend like Willie Nelson and one of the hottest bluegrass-country acts in the world (27 Grammys for Alison Krauss) on the same stage for $47 a ticket?


Our seats weren't the greatest, they were in the back of the Amphitheatre, dead center, about 10 rows behind the mixing control booth, near where we had sat for Alan Jackson. But, at least they were in the arena. On the day before, we received an email from the OC Fair reminding us of the concert.
In California, it never rains in July. Never! We are in the midst of the worst drought in the state's history. Water rationing is everywhere. On Saturday, a little, much-appreciated, El Nino rain fell on Orange County. It was supposed to let up on Sunday.


On Sunday morning, we received another email saying, "Rain or shine, the concert will go on." That reassured us somewhat, even though the skies were grey. We took rain ponchos to the fair with us just in case.
Our plan was to meet our friends Ron and Lee at the Baja Blues Restaurant that is located within the fairgrounds at 5:15 p.m. They would be with another couple and the six of us would eat and attend the concert together.


Rain started to fall at the fair around 4 p.m. Greta and I headed for the restaurant early to secure a table for six. By the time we got there, it was pouring rain and there was not a vacant table inside or out. The humidity was high. It felt like New Orleans or Houston in the summer.
Greta and I were standing outside under a roof overhang, with ponchos on, when lo and behold, a group left a table that was under an umbrella next to us. We grabbed it and gathered six chairs.


Our friends Ron and Lee arrived shortly. The other couple had stayed home. We ordered food and drink, had our meal, and kept repeating, "This rain will end soon." Here's how the table next to us looked: 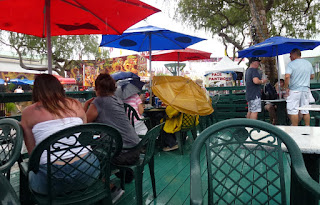 The tables next to ours 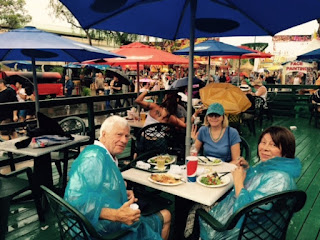 And Ron took this picture of our table
The rain was letting up. Ron checked the night time local weather report: 73 percent chance of rain. He said, "That means, a 27-percent chance it will be dry."


Ron asked to see our tickets. He said, "We have our friends' tickets in the car. They won't be using them. They are great seats and you can have them." He said he'd come to our seats to get us and lead us down to the other seats.
Greta and I went to our seats behind the mixing booth. There were rain covers protecting the mixing equipment , completely blocking the stage from view. That would have been a real bummer, but I reminded myself that Ron was going to move us to the better seats. Greta, in her always positive way, said, "See how blessed we are."


The new seats were in Row B, 10 feet from the stage. We could not believe that we were going to see Willie Nelson from the best concert seats we had ever had. 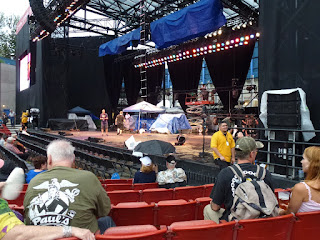 Close to the stage but no concert


The rain began to fall again. We had our ponchos on. A public announcement was made: "It is OK to put your umbrellas up, but during the show, you will have to put them down." A sea of umbrellas opened like spring flowers.
Stage hands were busy using squeegees to remove the water from the partially covered stage. The microphones were covered with plastic bags. Instruments were covered. I started to get that sinking feeling that these wonderful seats were not going to be of much help.


No one booed. Most everybody was wet to some degree. People stood up and left orderly. It took two hours to get out of the parking lot because everyone was trying to leave at once.


Ron sent me a text from his car: "I can't figure out how, but somehow we still had fun."


And Ron is right. Sure it was disappointing to not see Willie and Alison Krauss. But, you can't mess with nature. It just wasn't meant to be. We had a memorable time, which we will never forget. I do hope there still will be a chance to see Willie in person sometime soon. He's an all-time classic.
On Wednesday, we received the fourth email about the concert: "The concert will not be rescheduled. You can get your refund at..."