On Life and Love After 50

Last August, Willie Nelson was scheduled to perform at the Orange County Fair. My life partner Greta and I, and our Dana Point friends, Ron and Lee Cohan, had tickets for the concert at the Pacific Amphitheatre, an outdoor venue. The four of us realized it would probably be our last chance to see Willie, a country music legend; he turns 83 this April 29.

Most, not all, of the audience appeared to be ages 50 to 90. We were in our seats; the band’s instruments were in place on the stage. And then, it started raining hard; the show was canceled.

Three months later, when the four of us heard Willie would be performing this January 6 at the Grove in Anaheim, we purchased tickets.

On the night of the concert, it rained again, but the Grove is an indoor venue, so we knew the show would go on, although, I will admit the possibility of a rain-caused cancellation crossed my mind as we drove to Anaheim.

Frankly, my expectations about Willie performing were modest. I imagined that his family members, including his sons Micah and Lukas on guitars, and “little sister” Bobbie, as Willie calls her, on piano, would be the primary performers, and that Willie would sing only a few songs.

When the lights dimmed, Willie led his band onto the stage. He was wearing a t-shirt with “Maui” on the front and his usual red headband.

Willie picked up Trigger, the name he’s given to his ancient Martin N-20 classical guitar that he’s had for 47 years--the one with a gaping hole and faded autographs from famous people such as Johnny Cash and Waylon Jennings on it. He began with one of his classics, “Whiskey River.” The four of us were surprised with how great Willie and his band sounded.

He was on stage nonstop for over 90 minutes. He sang: Georgia on My Mind; On the Road Again; Angel Flying Too Close to the Ground; Crazy; Roll Me Up and Smoke Me When I Die; Good-Hearted Woman; Always on My Mind; and about 25 other songs, all of them familiar. 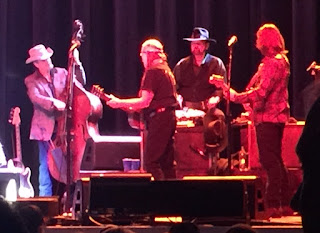 
He was gracious and personable. Fans kept tossing cowboy hats on the stage. Willie would wear the hats for a couple of songs and then toss them to the crowd Frisbee-style. He also threw five headbands to the crowd.

Another Orange County friend, Ken Stetter, and his girlfriend Peggy McGuire, were seated in the same aisle about 20 feet away, although I didn’t know that until a week later. Ken said, “I, too, went to see Willie Nelson - with Peggy. We also had tickets this summer at the Fair. I thought his ‘little sister’ Bobbie was a huge plus - really good musician. I had a great night - like you. Two thumbs up!” 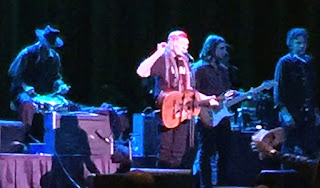 The one and only Willie Nelson, age 82, tireless

Greta and I didn’t know if we’d ever see Willie again. However, a week later we did, only this time it wasn’t in person. On Friday night, January 15, we watched on PBS TV station KCET, Willie receiving The Library of Congress Gershwin Prize for Popular Song.

He had received the award on November 18, 2015, in Washington, D.C. A multitude of entertainers performed his music as he and his wife sat in a booth above and to the side of the stage.

Johnny Cash’s daughter, Rosanne, performed “Pancho and Lefty” and Alison Krauss of the group Union Station performed, “Angel Flying Too Close to the Ground.” Paul Simon and Neil Young also sang. It was an incredible night of music.

After Willie received the award on stage, he strapped on Trigger and did a few songs with all of the guest performers joining him. With a career that spans six decades, his final song was, appropriately enough, “On the Road Again.”

Greta said, “Just because we are older, doesn’t mean we stop doing what we love. To Willie, 82 is just a number.” 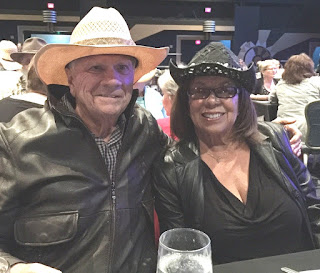 Tom and Greta ready for Willie to come on stage
Posted by Tom at 1:54 PM