On Life and Love After 50 newsletter

I met John Bates in Dana Point, California, in 1990 in the parking lot of the Dana Niguel Bank, which is now the Pacific Western Bank. My deli, Tutor and Spunky’s, and other local restaurants, were serving food at an outdoor Chamber of Commerce mixer.

John has always been interested in local transportation. In 1990, he was a commissioner on the Dana Point Traffic Improvement Commission. I recall him telling me that day, “Our first recommendation was to get rid of Caltrans and return to two-way traffic on PCH and Del Prado.”

Over the years, John and I have stayed in touched. Recently we met for coffee in the harbor at Coffee Importers. He is still interested in local transportation, but on more personal level. To get to the harbor from his San Juan Capistrano home, he rode his bicycle.

I asked him how often he rode. John said, “All of the time. Before I retired 12 years ago, I sold my car and used my bike to commute to my Dana Point office my home.”

“Have you always been a bike rider?” I asked.

He said, “I got my first bike at age 8 when my family moved from Los Angeles to Pasadena. That bike was several sizes too large for me. I couldn’t sit on the seat because my feet didn’t reach the pedals, so I rode around all day in a standing position.

“But, I loved the freedom and the extended range that that bike afforded me. I soon learned the streets of Pasadena, the Rose Bowl, Devils Gate Dam, Colorado Blvd and the Rose Parade. I knew it all and thought it was cool.

“I had several bikes during my youth, and graduated from fat balloon-tire cruisers to thin-tire hot racing bikes, and used them all for delivering newspapers and for my basic transportation for years. However, when I turned 16 and got my driver’s license, I put my bike away for several years.

John said when he and his wife Judy had children, they got their son and daughter bicycles as soon as the children were able to ride. The family went on riding trips together, including a three-day trip from their Mission Viejo home to San Diego.

John added, “Years later, when my daughter graduated from the University of San Francisco, she and I rode our bikes from San Francisco to Santa Barbara, a 360-mile trip down Hwy 1 that took six days. She and I still have occasional half-day rides, and always talk about the highlights of our six-day trip together.

“Now that I’m retired, I bought a battery-assisted bicycle, and use my bike to get to and from the Mission San Juan Capistrano, where I’m a volunteer docent, and zip around from Mission Viejo to San Clemente and Dana Point for lunch, coffee meetings, shopping, and various errands.

“At age 78, I consider myself very fortunate to still enjoy cycling. My bike is again my basic transportation, and, even after all these years, I still get a thrill from the freedom that riding a bicycle gives me. I fall off once-in-a- while, but after 70 years of cycling, I’m still in one piece and enjoy every minute on the road.

“By riding my bike instead of driving a car, I get valuable exercise and am pleased that I don’t leave a carbon footprint on the environment. However, I will admit that my wife still has her car and sometimes I ride with her.

“And regarding the 1990 Traffic Improvement Commission recommendation about the two-way traffic in Dana Point, it only took 25 years to make it happen, but we were right…it’s much better for all concerned.”


If more people would follow John’s bike-riding example, our cities might start to resemble European cities such as Amsterdam where bicycles outnumber automobiles. Wouldn’t that be nice! 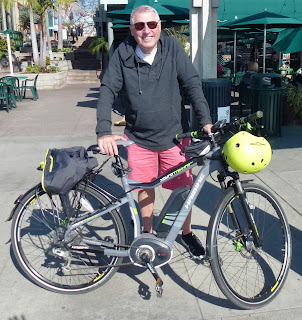 John Bates and his beloved bicycle      (photo by Tom Blake)